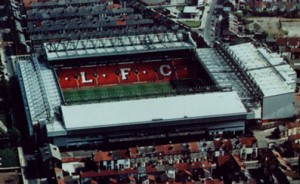 Liverpool Football Club was formed on the 15th March 1892 by publican and Mayor Sir John Houlding. However, their origins can be traced to a split between neighbouring Everton FC and Houlding. Everton were the original tenants of the Anfield Road ground and owed much of their existence and financial stability to the efforts of Houlding.

When Houlding tried to change the terms of the tenure of the ground, Everton decided to leave and bought some land on the North side of Stanley Park. So Houlding, with the help an old Everton friend, formed the new club Liverpool.

Following a recruitment drive in Scotland by manager John McKenna, Liverpool played their first competitive match on 1st September 1892.They gained admittance to the Football League the following season.

In their first season Liverpool gained promotion to the First Division, winning the title by eight points. In 1901 the club became champions for the first time and thereafter three more league titles came to Anfield up to World War 2.

They regained the title in 1947, but the following few years were notable for the demise in their fortunes culminating in relegation in 1954.

When Billy Shankley was appointed manager in 1959, Liverpool’s revival began. Promotion back to the First Division was achieved in 1962 and they have remained there ever since. Victory over Leeds United in 1965 was their first ever FA Cup final victory and since then the honours have continued to arrive at Anfield.

Liverpool began life at Anfield and have been there ever since. At various stages, parts of the ground have been modernised, and perhaps the most significant came in 1928 when the first roof was installed on the Spion Kop.

In recent years there have been attempts to move to a larger stadium in the adjacent Stanley Park, but financial restrictions have delayed this venture. Anfield currently has a capacity of approximately 45,000 and the club are hoping to build a 60,000 seated stadium.

Replaced Keegan in 1977, and went onto become a Liverpool goal scoring legend, helping to win many trophies. He became manager in 1985 winning the league and cup double in his first season.

A two footed winger who made 534 appearances scoring 228 goals during a career spanning over 20 years. He was never booked.

Scored 346 goals in 660 appearances was one the finest goal scorers of his generation.

He was known as ‘Crazy Horse’ by the supporters for his enthusiastic playing style. He was the first captain to lift the European Cup.

He was born in Liverpool and made 477 appearances for the club, lifting the European Cup in 1981.

What is your favourite memory of Liverpool?  Leave a comment below and we’ll pick our favourite one for a prize.

2 Responses to “History of Liverpool FC”

Ashey: actually there is one with Rooney shooting at the ditercor of the commercial. quite predictable as well but funny. especially because the ditercor asks him [...]

Jillrose: Can think of very few sides who play that Christmas tree formation. Venables and Hoddle used it with England in the 90s, Ancelotti used it [...]

bishopabiodun: can liverpool resign there once shining super striker but know underfire or on a low key at stamford brigde i mean fernando torres the one [...]

bishopabiodun: am lookig forward for more attacking option and hopefully more signings from the man who is doing wonderfully well,kudos to brenda rogers.we will never work [...]

hillary: we will never walk alone.for united we stand .lets keep it up.

Sylvain: Absolutely ridiculous . Quality batadcrsos to accommodate our diverse community, a beautiful heritage site, a long standing tenant, and if they remove the facilities (as [...]

Mavlyuda: Anoymous Good side. Doubling up on BIR defense is a risk, but you never know. Excellent mieifdld and forward line.I would play Etherington [...]